You are currently browsing the monthly archive for June 2007.

Ignite Learning And Fail The Future

June 4, 2007 in Nietzsche's Prophecy, Teaching As Dialogue by Harvey | 4 comments

Neil Bushâ€™s new work was featured â€“ fairly critically â€“ in a NYT article the other day (5-30-07). A highlight of the article was that one of the Bush boys was actually diagnosed as dyslexic when he was in school!

Neil is head of a company which produces educational videos â€“ and sells them to every school they can. The article is quite critical of this endeavor. For me it raises lots of questions about the times weâ€™re in, as well. Maybe especially in education: and, or, butâ€¦

â€œThe (advertising)clips emanate from a purple plastic box, known as a COW, for Curriculum on Wheels. They are the brainchild of Neil Bush, brother of the president, who is president of Ignite! Learning. The company has sold its science and social studies curriculums, aimed mostly at middle school grades, to 2,300 of the nationâ€™s 85,000 public schools, and is seeking to expand its business to China, Japan, South Korea and the Middle East.â€

The article wonders if these videos play to the No Child Left Behind federal attempt to control curriculum and learning â€“ special favors for the Bushies. And it questions whether these videos are an active assault on textbooks â€“ videos are more â€œexciting,â€ get and hold the kidsâ€™ attention, and also on teaching and the teachersâ€™ place in the world of education.

Iâ€™m very sympathetic with this particular critique â€“ about which families are in power, and how that plays into control and money over practically everything. But I have some wonderments about where we are in the world, including PowerPoint which has taken over much of higher education â€œteachingâ€, and the current directions of and for education.

Itâ€™s been just two days since I got a book from the central library at the U. of Minnesota where I teach. Itâ€™s between teaching times, so there arenâ€™t all that many students around, but â€“ beyond the computer lab on the main floor which was full of students, the place was essentially empty except for me and some staff. This was also pretty much the case during the semester, but it re-called my attention to the fact that the world â€“ including, perhaps particularly education, has been shifting rapidly, and a great deal. 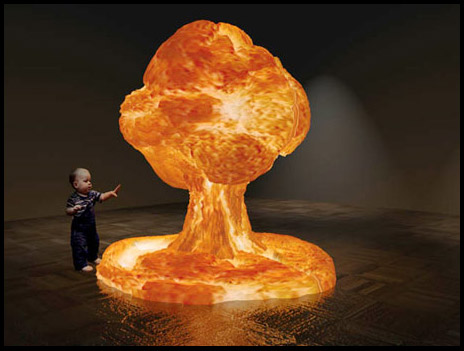 My first wonder is if there are any â€œpeopleâ€ in classrooms, or in the worlds of learners. Most of the students, these days ( I think â€“ at all levels) are being geared toward performance, toward getting through, toward getting credentials â€“ and getting out into the real world where they can â€œsucceedâ€ and earn more/lots-of money than if they dropped-out (and the ethnicity of the drop-outs remains a screaming scam!). Education: interesting, fun, towardâ€¦?

Entertainment, show-biz: most â€œlive personsâ€ (call them â€œteachersâ€) are not all that attractive in current kidsâ€™ esthetics, at least much of the time. Much of teaching is about classroom and behavioral â€œpoliticsâ€ â€“ and this seems to be much of the â€œtrainingâ€ of persons who teach, these days (at all levels?). What appeals to kids? As Neil Bush â€“ if his videos â€œsellâ€ â€“ they at least explore what appeals to those who buy them, and likely to kids. Marketing isâ€¦allâ€¦there is?
END_OF_DOCUMENT_TOKEN_TO_BE_REPLACED