You are currently browsing the monthly archive for September 2007.

Teaching-off-Campus (In Support of a Strike)

September 13, 2007 in Next Places, Teaching As Dialogue by Harvey | 2 comments 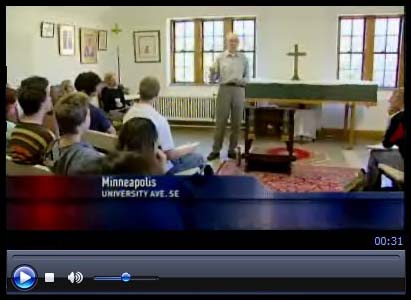 [Video about the strike, interviewed me and a student after class, from KARE 11 News]

About 1/3 of our secretaries, technical workers, and some others have gone on-strike at the University of Minnesota â€“ seeking higher, more reasonable wages. The administration continues to resistâ€¦

Iâ€™m a (tenured) Professor of Cultural Studies and Comparative Literature. Given that the secretaries are my co-workers, friends, supports, I (and a number of others â€“ professors and graduate instructors – this all began on the first day of classes this year) have decided to teach our classes nearby, but off-campus. My location is a couple of blocks from the original University classroom site: University Baptist Church in Minneapolis.

This course is â€œIssues in Cultural Pluralismâ€ and has over 40 students, mostly juniors and seniors; almost all of whom seem pleased to be off-campus (a few dropped the course, for whatever reasons). The church room is quite informal, and helps us to engage in the kind of active dialogues which enrich my teaching style.

With a few comments about the strike â€“ especially noting that the strikers are mostly women â€“ an aspect of the primary questions of Cultural Pluralism: who are we, who â€œmakesâ€ it in America, who doesnâ€™t do so well; history, why, when did women become â€œcitizens?â€ â€“ answer 1920, with the 19th Amendment to the U.S. Constitution, we have been actively discussing the course subjects.

The course is â€œframedâ€ by an argument between Aristotle in his â€œPoliticsâ€ and Thomas Jefferson in the â€œDeclaration of Independence.â€ Aristotle claimed that â€œsome men are destined by nature to be kings, and others to be slaves.â€ – the historical justification for monarchy. Jefferson stated that â€œall men are created equalâ€ â€“ democracy, not monarchy, for the first time in history. I remind the students that America is framed in slavery – the 13 to 15th Amendments “ended” it the first time; then “Separate-but-Equal” in 1896 until 1954 and Brown vs. the Board of Education, and now the huge numbers of African-American (mostly young males) incarcerated by drug “possession” – What and why? – we ask.

So: ideas from history, who gets/deserves what and why, monarchy vs. democracyâ€¦to the Constitution: â€œWe the peopleâ€¦â€ and its evolution to include most everyone until the complications of today. But Amerindian people, African-Americans, Latinosâ€¦some others still are excluded, profiled, etc. We are in a â€œmoney-bubble,â€ a new â€œGilded Age.â€ How to see the present, to locate ourselves, to work toward continuing democracy in a most changing world. Immigration and its history; eugenics, Hitler, many of the ideas were developed right here!

The movement of classes off-campus has been resisted â€“ scolded, even â€“ with the claim that we are not doing our proper jobs. I respond that the U. of Minnesota has been a â€œLand-Grantâ€ University, and ask if we are abandoning that idea and moving toward whatever buys prestige and big bucks, credentials more than critical thought and ideas. I hope that students in this course learn much, especially toward critical thought of how and where we are…and where they will take us in their futures.

I quote the lovely phase embossed high up on the central meeting ground of campus: Northrup Auditorium â€“ and wonder why it is not included in our current â€œstrategic planâ€ for the University:

Founded in the Faith that We are Ennobled by Understanding

Dedicated to the Advancement of Learning and the Search for Truth

September 13, 2007 in Foundations Project by Harvey | No comments

These several extended explorations are attempts to probe basically and deeply — into the underlying frameworks of our thought about the human. Very generally, we have either taken easier or simpler notions of the human to try to account for how we are, think, live.

I’m posting this work in progress to gather comments and feedback, which sections are most interesting today — or not — let me know what you think.

Context, to begin, takes up the continuing questions of how we come to know and live contextually. The usual drill: “leave it to context” â€“ avoids the underlying truths that contexts are aspects of our knowing. Where we are, how we know that, how this shapes or affects our understanding: what is same, what different; when do the same concepts mean differently in various contexts?

As these continue to be works-in-progress, I have not yet begun to address how we, for example, learn, know, and discern the contexts in which we find ourselves; or teach them to each next generation.

Human Nature begins or underlies much of my observations that we have traditionally (and continuing) mis-or under-estimated the human. Especially in the Western philosophical tradition, we continue to play theme-and-variation on the mind-body and the idea that humans are unique “due to language.” We have moved away from observation in deep and subtle ways, as we use the concepts of language on which to focus and organize thinking about the human: Meaning, Reality, the Idealâ€¦

Especially in this era of the rise of “strong religion,” we are in the midst of these conflictual ways of thought and being, but are more arguing “politics” than the underlying issues, as cast in the Foundations Project. Morality explores these issues, beginning by questioning whether morality is only or particularly human (NO! itâ€™s a part of the being of all social species). How do we come to be moral: part of our interactions, especially with m/othersâ€¦

Looking beyond the Western tradition, it has become clearer that questions of Life Paradoxes (just beginning this study) are everywhere, but vary in different traditions. Some traditions want/choose to “resolve” paradoxes on one side or the other, while other traditions find them to be “complementary.” How this happens or “works” seems to underlie much of how we consider our being, reality, etc. In Western thought and religion, whether change or permanence is the real, underlies most other arguments in these days of the rise of strong religion.

Last (up to this moment), the questions surrounding Identity flow in many paths and moments reflecting and refracting the other Foundation Projects.