You are currently browsing the monthly archive for November 2007.

November 2, 2007 in Language and Human Nature by Harvey | 2 comments

Memories of Washoe (the chimp who â€œspokeâ€ sign language) â€“ but more especially about the attempts to explore the relations and differences between chimps and humans. Letâ€™s give a few minutes to mourn her death, and to think about how her presence especially helped to make deaf persons (especially congenitally deaf persons) into fully human beings. 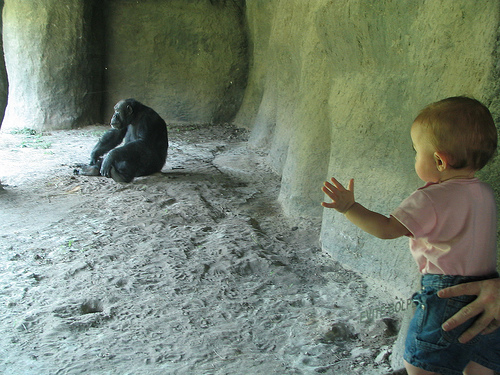 A Confession: I only saw Washoe on film â€“ signing with and to people.

But I was a fairly constant discussant of the issues involved by the chief investigators, Allen and Beatrix (Trixie) Gardner. We had first met at a meeting with William Stokoe, the author of American Sign Language, and Professor at Gallaudet College for the Deaf in Washington, D.C. in the 1960s. We continued discussions for a long time.

Some context: Sign Language was not permitted in any American schools for the deaf, until 1972 â€“ and Bill Stokoe was the person who rounded up a number of allies to make all that happen. Deaf persons using sign language now seems commonplace: interpreters are available in many settings; most deaf kids learn and use sign language; there are courses at most universities. But this all happened because of Stokoe â€“ the work of the Gardners with Washoe â€“ and the accurate shifts in our thinking about the deaf. (see Oliver Sacks, â€œSeeing Voicesâ€ for a review.)

I had been deeply engaged with the critical exploration of language as a presumably â€œuniqueâ€ aspect of the human, and what makes humans truly human. My own work shares the approach of Darwinâ€™s last book: â€œThe Expression of the Emotions in Man and Animalsâ€ and lays out the various subjects to be explored to enter human nature beyond the assumptions of language as defining us. I wrote a book (â€œAfter Metaphysicsâ€ â€“ republished later as â€œLanguage and Human Natureâ€). I try to take the fact that we are bodies in interaction with othersâ€™ bodies, and more fully explore our nature. (Bill Stokoe wrote the Introduction to the second edition.) END_OF_DOCUMENT_TOKEN_TO_BE_REPLACED