You are currently browsing the monthly archive for April 2008.

April 11, 2008 in Next Places, Nietzsche's Prophecy, Teaching As Dialogue by Harvey | 13 comments

A recent review of Nick Maxwell’s book – founder of Friends of Wisdom – met with them in London last month – and my comments interwoven.

From Knowledge to Wisdom

Nick Maxwell’s recently republished book â€“ “From Knowledge to Wisdom” â€“ may be reaching its time. First published a quarter century ago, it got many good reviews. But its ideas didn’t “go” much of anywhere in terms of thinking or practice; a palliative with little action; a “feel-good” approach which we could ignore untilâ€¦right now – says Nick. 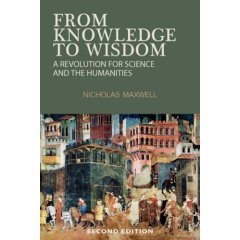 Nick asserts that we are heirs of earlier ideas, committed to the exploration of the universe, but without the thoughtful (moral) bases which gives philosophy and life its groundings and meanings. Philosophical knowledge has taken us far and wide, butâ€¦leaves the human condition with little more than promises of the ultimate utility of that knowledge. It contributes little to the “best hope of helping us progressively to resolve our most urgent problems of livingâ€¦a more humane, a more just, a happier, a saner and more cooperative world.”

As the book takes us from several century old ideas of knowledge to the “needs” of the current era, Nick guides us through the history of thought which has dominated (philosophical) knowledge then and endures to the present moment: what is the universe, how do we study it, how do we know, what is truth? We have come far, in many senses, but now seem to be at some impasses.

He urges us to rethink where we are, how we got here, and the deep necessity to broaden our explorations toward (philosophical) wisdom, rather than being bound to particular and narrow historical ideas of what knowledge consists in.

Wisdom is the perspective that how we go about thinking and pursuing knowledge must include its effects on and implications for the human condition. In so many senses, knowledge has “overstepped” itself, and has endangered our very existence: e.g., the blights of the 20th century – holocausts, atomic bomb, GMO’s, and so much more. END_OF_DOCUMENT_TOKEN_TO_BE_REPLACED

I’ll be part of a roundtable at this weekend’s conference: Rethinking the University: Labor, Knowledge, Value

My roundtable will be: “Radical Pedagogy.”

I’ll talk about Teaching as Dialogue, attempting to put some flesh and experience on Paulo Freire’s hope that teaching can become a dialogue.

The questions: what is dialogue, how to practice this with actual students/people, how to become and be such a teacher who can inspire the students to
seek meaning in their own futures, to learn from the dialogue and move on. These are all complicated practices, needing constant study of the students who are actually present, and the need to maintain one’s own “presence” with them, so that the teacher is not talking from “memory,” but is “right there” to respond to the actual students in the ongoing dialogues.

The politics of dialogue are also complex. Students – after all is said and done – are students of the course, and they are students of “their teacher.” The problems of having “sufficient power” to inspire the future, to help them create meaning for themselves – revolves about portraying/living as one who is thoughtful, moral, loving of subject, of students, and seeking meaning in the teacher’s own life and work.

Dangers include the temptations of the power yielded by students, to tell them how to think and be – to have ready “answers” to all questions – or to overstep one’s power and move from questioning to interrogation modes. So, the study of oneself – and of one’s students – are ongoing tasks. It is helpful, probably vital for teaching as dialogue, to have a couple of good, critical friends who will help keep the teacher grounded.