You are currently browsing the monthly archive for July 2009.

[From Nick Maxwell’s current Friends of Wisdom Newsletter No. 5 (PDF)]

I’ll give you my opinion forward and frank: I think this is a good book. What I have been reading the past month has been a book about teaching. I have read a few books on teaching, and most of them are full of theories and techniques to teach effectively, with standard presentation tricks like â€œSay what you are going to say, say it, and then say what you have said.â€ These books are usually written in the manner of a college textbook, authorative and impersonal.

The book that I have read and am reviewing now writes about teaching in a very different manner. It is, first and foremost, a very personal book. Harvey B. Sarles has written about his vision on what teaching is and what a teacher does and instead of writing about teaching as a job he writes about the teacher as a human being. From this perspective he explores the role of a Teacher, which is â€œthe person who becomes Teacher to oneâ€™s students: entering their spirits in some depthâ€.

I admit I was at first a little put off by the ambitious metaphors of this kind in the beginning of the book. But Harvey Sarles has in his book distilled from the concept of teaching, which may be muddled up in â€œThe Present Ageâ€ (Kierkegaard), the purely human and social aspects. And as he puts it, Teaching is not just about transferring knowledge, it has the potential to shape minds and ideas and to inspire. END_OF_DOCUMENT_TOKEN_TO_BE_REPLACED A celebration, a wedding, a joining of the lives of two people, culminates the planning of a year’s concentration. A party: two person’s lives join together into some notion of futurity which is the faith of their ongoingness.

Preparation, the imagination of friends and families somehow getting to the same place at the same time. A kind of public fantasy, the twenty years of youth growing up, growing to be and to become another person, an intellect, a thinker and doer; now, two thinkers, two doers, deciding to be together in the whatever that is a marriage. Still their parents’ children, still children to their parents. Yet a who, a what, a something in its own times and place.

Bread, a feast, wine, dance, the beauty of bridehood fixed upon our memories into tomorrow’s hopes and each new day’s is and was, would and will be. When will the questions stop, when will I be satisfied with who I am, and why?

Suppose that I am virtuous, a person who performs what he preaches; a person who preaches a morality of no little substance; neither great paragon nor whatever she is not. Suppose…

Adrift, somehow, somewhere, beyond the history whose knowing shows how I got here; that there are many other ways I might have gone. My self, an accident of some history, some fate; some fate, some destiny with any sense or purpose…or more a mere happening?

What difference, I ask. Seeking perfection, perhaps, but finding it was lost…Trying to be profound in a mundane world, struggling to be honest with my self, leaves virtue having to take care of itself. Perhaps I will discover virtue in the living and doing? Be kind, be good, be strong, treat others as oneselfâ€¦!

(Further notes after my first “My Teachers” post, and additional perspective from my prior post on the State Department, Foreign Service Institute, and our Current Ignorance of the World.)

My teachers of Anthropology and Linguistics at SUNYBuffalo, had been working for the U.S State Dept, in the Foreign Service Institute (FSI) during and after WWII. Their work consisted centrally of working (â€œfieldworkâ€) in the different Languages and Cultures of the world â€“ advising and teaching State Dept personnel in exploring and understanding the other languages and cultures of the world.

Language and Culture were considered important in understanding and dealing with the world.

Different peoples and nations had to be studied in their â€œown terms,â€ in order to understand and deal with them â€œrealistically, effectivelyâ€¦â€ To be an effective statesman, one should speak the native language In these senses: other countries were different from us, but should be studied in their ownÂ  terms, toward good and effective foreign politics and policies.

As Secâ€™y of State to President Eisenhower, John Foster Dulles had a quite â€œdifferentâ€ picture of the United States and other countries. They were not just â€œdifferentâ€ from the U.S., but they were considered as somewhat â€œlesser,â€ in the contexts of a kind of â€œhierarchyâ€ of nations. (Dulles was a deeply religious person with a deep sense of â€œAmerica-Firstâ€ â€“ America was a kind of â€œCity upon a Hill.â€) His picture of America and the world has persisted well into the present.

In any case, all the Anthropologists and Linguists in the FSI were â€œfired,â€ in 1955. END_OF_DOCUMENT_TOKEN_TO_BE_REPLACED

In the June 29 Mpls. Star-Tribune, two extensive editorials debated the notion that many new teachers in our local schools would be sponsored by Teach for America: public schools, charter schoolsâ€¦

The usual routes for teachers trained by Colleges of Education would not be judged by Teach for America, and these new teachers â€“ who primarily have earned very high grades in getting their college or university degrees â€“ would offer much better teaching to our K-12 children. Or they would not â€“ said the other editorial.

Whatâ€™s going on here? Are our schools failing with the ordinary or usual teachers: how badly or well are they doing â€“ for whom? Who are these new teachers: are they â€œqualified?â€ To do what? Will they be better teachers? Or is this so much hype?

Here Iâ€™m speaking from the perspective of a Professor at the University of Minnesota, where I have been selected as â€œTeacher of the Yearâ€ in 2001, in the College of Liberal Arts. I also teach a course in Teaching as Dialogue: a book I also wrote. Just this Spring, Iâ€™ve been involved in the recently formed â€œGreat Teachersâ€ program.

And during the â€œmoney bubbleâ€ times weâ€™re currently passing-out-of, there has been a virtual redefinition of students. Like Medicine (capitalized), students and patients have all been â€œconvertedâ€ to â€œConsumers.â€ There are really no persons in this description which has sold so well during the money-bubble. And so there arenâ€™t really any persons doing the teaching: increasingly removed from teachingâ€¦it used to be lectures from â€œyellowedâ€ ancient lecture notes. END_OF_DOCUMENT_TOKEN_TO_BE_REPLACED

Right now I feel that my feet are like the Rock of Gibraltar, solid grounded. At the same time, in the same moment, I am loose and flaky as if the rock were thinly-layered shales, moving in any and all directions with the ease of a soft summer evening.

This condition acts itself out in my world, both doing and watching. I have more nerve than before: nerve to try new things, to take new risks, the nerve to be willingâ€¦

It is partly that I want to learn, to study what is happening in these times of the revival of religion â€“ especially in the rising concepts of death over life.

It is as if the thinking and fears and hopes of the aged and infirm have gained ownership over life, as it has increasingly, in their own lives. It is as if women – who are the future â€“ have lost the vitality to inspire the future.

I want to know, to understand the ideas of forever, and what then happens to each day. Where and when are the future, when impending death looms so large? Why do the ideas, prophets, and texts of the past overtake the present? Is it a search for certitude, protection from fears, a dispute over reality?

This takes my being in new places, pushing upon the powers that appear to be, to see where they yield, when they are soft or very hard, how they exist and oppose, and against what forces – perceived and real.

I want to help to recreate the idea of meaning, and of life: of living a meaningful life. Right now the urges and surges of nerve want to take on these explorations. Will I, howâ€¦can I explore such grand images? 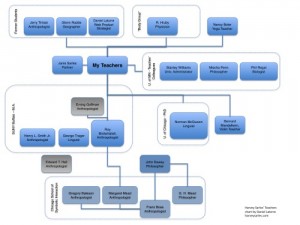 Ray was also a student in the line of thought and active fieldwork (life is fieldwork!) of Franz Boas: Margaret Mead (especially), Gregory Bateson, influenced his thought. END_OF_DOCUMENT_TOKEN_TO_BE_REPLACED