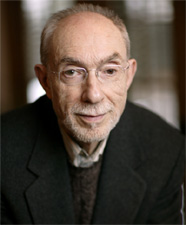 Harvey is a cultural critic: begins with a study of self; moves out in all directions. Early 1960s: after anthropological-linguistic fieldwork in Southern Mexico, he returned home to rediscover his own culture. This became a frame for thinking, scholarship, and teaching: how to see, rethink what seemed ordinary, obvious, implicit.

Displaced early in his academic career following the invocation of Descartesâ€™ ideas about the human â€“ “I think, therefore I am” â€“ he began to read to the foundations of thought. Power of ideas continues to astonish him.

Ideas of Plato and Aristotle define much of modern thought, displace the mind from the body, and fuel most current world polemics. His book, “After Metaphysics” (“Language and Human Nature”) questions prior thinking about the human, outlines directions for future study.

Trained to study the human body-in-interaction (Kinesics of Ray Birdwhistell following Pragmatist G.H. Mead), he observes others, but always returns to the study of himself as observer-interactor. Some of his central questions:

What is a human being? (Who am I/you?) What history, politics, esthetics, morality? Men and women: how did we get here? What are non-humans: the ongoing history of racist thought? Change and/or permanence? “Nietzscheâ€™s Prophecy: The Crisis in Meaning” probes this changing world.

Harvey is a celebrated teacher, trying to touch and inspire the future, as he engages in dialogue with students and all those interested in being and engaging the world. His “Teaching as Dialogue” examines teaching and teachers.

Having done fieldwork in other culturesâ€“ in Southern Mexico, England, and New Mexico, Harvey Sarles returned “home” to rethink his earlier world and what it means to be a person: oneself. His life study â€“ with partner Janis â€“ is of us as we live and experience the world: forms of cultural critique.

Ongoing thought and study has directed his work to the study of human nature: language, especially, but within a notion of complexity of the human body in interaction with others. Language is usually invoked to explain the human, but in narrow ways which his work hopes to explore and expand. Thus: “Language and Human Nature.” Observe, study, people, culturesâ€¦oneself, being and observing: try to check out othersâ€™ ideas, and move on out to note what is.

Having been taught that the world of academia and science is about the pursuit of truth, he was “interested” to discover that ideas and scholarship were often strongly affected by politics, academic culture, and success. His own success – fairly much, early and promising – was strongly shaped by “revolutions” in ideas, in which he often felt “caught.”

A “revolution” in linguistics â€“ Chomskyâ€™s invoking of a particular philosopher, Rene Descartes – caught him unawares, and led him to read about ideas: forward from Descartes to the present, back to Plato and Aristotle and beyond. His tactic or defense: to study the nature of academic revolutions and the nature and practices of the academy, to reenvision the nature of knowing and the university.

That re-awakening also extended his study to include “revolutions” in thought: how ideas work and change, how they are embedded in history. At this time, he read about the history and politics of ideas, the marketplaces of knowledge, and how we think about the meaning of being a human being.

From this experience, hitting hard in mid-age, he began to rethink himself; to ponder where there is to go in anyoneâ€™s life. His “Next Places” reflects his attempts to analyze ones life, in order to move on, whatever moment of desired change one is living. It also altered his style and ideas of writing. The short form or prose-poetry were most attractive, seemingly powerful in the ability to probe deeply into the world’s wonderings. Haven’t much sold, so far. But this is a new day, a different time in history, it seems.

Early education and work in the world of computers alerted him to the powers of change occurring in the technological world, and how this shapes who and how we are. In a culture which is deeply split over the very nature of our being, the question of meaning has become a central issue of all our lives. “Nietzscheâ€™s Prophecy: the Crisis in Meaning,” probes what is happening in our globalistic reachings.

As a teacher, Harvey explores the nature of that interaction, and engages in modes of teaching as a dialogue. His “Teaching as Dialogue” explores the experiences between teachers and their students. For him, teaching is life-work which inspires the future of oneâ€™s students.