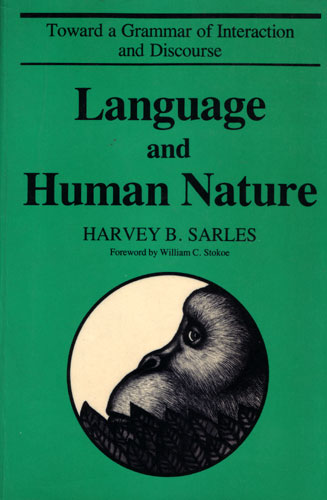 A book of essays which (deeply) critiques the assumption that language is what makes humans – human: i.e., unique, different from animals. Humans are human, alright, but…we have neglected much in our thinking that human=language; e.g., faces…in interaction; gender.

The first two sections lay out the critique – of our thinking, and our approaches – to the human; but also including the study of other animals whom we have tended to oversimplify. We have much to rethink about the human, other animals, and to our guiding ideas.

1. Our understanding of human language is quite limited or narrow, because we have presumed that language essentially defines what is human. For example, we have presumed – since language has been thought to enable us to be social – that no other animals are social: simply untrue.

2. We still don’t know all that much about (other) animals, to know whether they have language (abilities). Studies are showing that some other animals are more social and much smarter than we had thought.

3. Our ideas of what is human (and human nature) remain confined, because we decided in advance what human is. (The current polemic between brain or mind/spirit/soul totally characterizing us, is a prime example of presumptive thinking.)

This marks a very good beginning for rethinking what is human: and there is more in later sections of the book:

Part three describes how we think normatively about the human, and what this implies for our particular depictions of the human. Biologists and social scientists carry much intellectual (and political) baggage into their studies and claims. How, then, to study the human…as we are?

Parts four to six develop new ways of considering and exploring the human, both in terms of ideas, and actual practices in considering language: a critical naturalism. Observing: others, but also oneself observing. “Man is the measure(r) of all things.”

How to study how we understand language, one another, and the world:

– The Study of Intelligibility – language is dynamic, not merely an array of syntactic structures. Methods for doing this.

Q-R (Question-Response System). Language development has been depicted from assumptions, not from the actuality of child-m/other interactions. Language and the self are emergent from that relationship. The question of how we emerge as individual-self is central to our understanding of the human.

The last section proposes methods for (re)examining the human: as we are. From facial expression and body movement, the attempt is made to lay out the study of the human as deeply interactive. The final essay enters the ancient-enduring question of how we know others and the world: “Around the Cartesian Impasse.”

In sum, the title “After Metaphysics” is a parody of Aristotle’s idea that physics (the body) is primary, and the mind et al are after or me ta physics. This title attempts to proclaim a new era for thinking about human nature > more accurately, inclusively.

Mind-body dualism is an assumption which flows from ancient thought, and still frames thinking about the human. More: it is a presumption, simply believing that this is the way of the world. Period!

What difference(s) does it make? This is the meta-story of “After Metaphysics.” I think metaphysics has provided us a particular and limited story of the human – human nature – which underlies much of our being.

– Much of our being is neglected – at least on the surface – while differences often rule the Realpolitik of, e.g., gender, race, normality, often age, power; facts of our interactions.

– Our bodily being is taken for granted, backgrounded.

– Our Identity – Who I Am – is portrayed only partially; often with biases. That we are bodies which interact with other’s bodies is omitted from our being who we are.