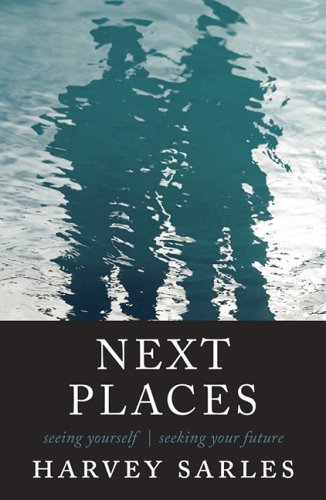 Next Places: Seeing Yourself, Seeking Your Future (2006)

Order Next Places from Amazon

Next Places is a book for anyone reaching a point of change in life – the young adult moving from school to the world, the professional who is no longer satisfied with his or her work, the person making the transition to another town or a new relationship, the baby boomer contemplating how life will be once out of the workplace, or an older person continuing to open up new paths toward wisdom. Rather than laying out a universal quick fix for dealing with change, Harvey Sarles’s meditations entice readers to find their own senses of self-clarity.

Next Places helps readers seek and define guideposts within their own experience, rather than seeking their soul or destiny in places outside of themselves. The idea is to handle change by growing oneself in one’s own terms whatever these might be at any given time in life. Each person’s path will reveal itself in ongoing meditations.

But Next Places is not just for the individual who is experiencing life change. It is a rich compass for any reader who is interested in self exploration and contemplation.

There are: places, nations, cultures, times where youth is directed toward a search for some essential being… vocation, calling, vision.

Future portrayed, choices to be made early. Search for the true way in life, to be discovered, to be told by some force.
Knowledge? Power?

Once made, once the mantle of that vision is tried, worn, become the extended version of self,
it is who one is, who you are.
You of past, you of future.
An anchorage, a place to be, to return to. A quiet place in a changing world.

A vision may cripple in its finality which endures. A decision made in youth.
That vision may yet determine today, updated or not. A faith in youth-ful good taste?
Now? What?

A vision which enables is
a model, a mold
an against which
to measure what is now.

Which visions contain the space for approaching times?

The immense difficulty in living,
is in maintaining integrity in my being
whilst being able to live in the present and for the future.

To maintain integrity in terms of some vision of self, is not difficult.
I have merely to suspend present observation and judgment; To bend interpretation in the direction of what and who (I) was.

Others?
Do they not tell me what is, now?

The cost?
I have to deny, or to remake
the present/future in terms of this older, yet younger,
version of myself in the world.

In rather odd senses,
I am at war with my own history!

Steady. Study. Hang on.
Who are we? Who made us?
How did we become our selves?

The myths of objectivity,.
Of knowing our selves as others know us
Become the story of our own becoming

As we write our own stories,
As they are told us,
We are our own studies in self.

Hold still, my self
That I may see you, study you, know you, And become the character that I would be.

The technological world has transformed being so that many of us can live “the longest life.” As Cicero, in ancient Rome, asked however: given that we all aspire to live long lives, what are we going to do in old age? How do we construct our lives – is it even possible to “construct” a life – so that we have, as Kierkegaard expresses it, “character tasks?”

We cannot all become any particular thing, martyrs to the same cause, heroine to our own childhood imaginations. Often, life seems to move on of its own momentum, its own pace, carrying us along with it. Does it mean something to ask: Can we enter (re-enter) our own lives? How? “Start the world again, and I will climb on!?”

Kierkegaard didn’t know how either, but suggested a powerful contrast for our contemplation. From the cultural “outwash” city of Copenhagen last century, where everyone (like the Twin Cities) seems to “be” a Lutheran, he deplored the joining of any church, and implored each of us to re-enter the life of the deity: for the Christian – Christ. But, he argued, it is insufficient to join the church, to worship or become a disciple of Christ, a mere believer – this is to stand outside of our own Being, of ourselves. Instead we should live just like Christ lived: as a close approximation, as close as humanly possible, to living as Christ…or Mohammed, or the Buddha, or the Great Spirit, or Jehovah, or…In 20th century parlance, we should model our lives like his, but ever more strongly and completely. Not passively to accept, but to act and live… thoughtfully.

Experientially, this is not so simple. For Kierkegaard, he was steeped within a family and the church, and reacted violently upon his 25th birthday, to not having “done” anything. For most of us, we are raised by others, within the contexts of their life arrangements and outlooks, and generally operate within their thinking and their outlooks. Most of us, if we enter into life crises, think rather that we have been incorrect, misunderstood, or have otherwise “messed up.” It does not occur, to us, in any “long-life” sense, that we should construct our character tasks. Rather we prepare to be adults, gathering some sense for what that might mean, from those we see, from family, friends, teachers, neighbors. If we experience crises of being, of insistent cries of our own being, of our existence, telling us that all is not so good, they mostly arise somewhat later in life, after we climb the rungs of our own life-ladders, and are either stuck, or find that some supporting rungs have become worm-laden.

Well, what inspired this book of meditations, was the outcome of a “religious” event: the mass suicide in about 1979 at Jonestown, in Guyana. This was a most dramatic event, coming as it did within a time when many, many people seemed to be worried, and were searching for…for something. Too, it was the reaching of our own middle-age whose children were about to jump from the nest, and life seemed to insist on constant evaluations… which were not at all “A+.”

Was it us, or the times, or the world, the economy,…? It was a time to wonder, what had happened: gone wrong, could it be righted? What next? How to think about it? How to regain, to re-gather the strength and thoughtfulness and humor about being, which we told ourselves – we had loved in ourselves and in one another?