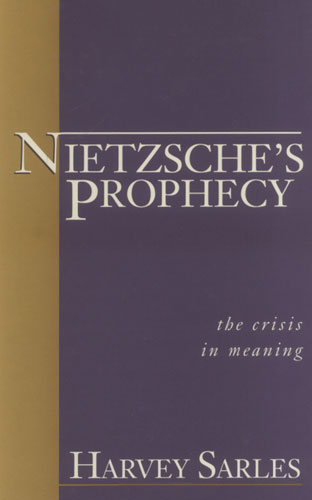 Nietzsche’s Prophecy: The Crisis in Meaning (2001)

Extreme positions are not succeeded by moderate ones but by extreme positions of the opposite kind. Thus the belief in the absolute immorality of nature, in aim- and meaninglessness, is the psychologically necessary effect once the belief in God and an essentially moral order becomes untenable. Nihilism appears at that point, not that the displeasure at existence has become greater than before but because one has come to mistrust any “meaning” in suffering, indeed in existence. One interpretation has collapsed; but because it was considered the interpretation it now seems as if there were no meaning at all in existence, as if everything were in vain.

Friedrich Nietzsche
The Will to Power

In the history of the human spirit I distinguish between epochs of habitation and epochs of homelessness. In the former, man lives in the world as in a house, as in a home. In the latter, man lives in the world as in an open field and at times does not even have four pegs with which to set up a tent. In the former epochs anthropological thought exists only as a part of cosmological thought. In the latter, anthropological thought gains depth and, with it, independence.

Martin Buber
Between Man and Man

The novelty is that we have presented a unified and organized vision of faith . Cardinal (now Pope) Ratzinger says, It offers a fundamental vision of man, his life, his destiny. Today, Marxism is dead and liberal ideology is so fragmented that it no longer holds a common solid and coherent vision of the human race and its future. Out of this void rises the terrible danger of nihilism. (concerning the recent Roman Catholic Catechism).

Given the state of science in particular, a man is made only of what people say he is or of what is done with what he is…The world is one in which lived events have become independent of man…It is a world of happening, of what happens without its happening to anyone, and without anyone’s being responsible.

Robert Musil
The Man without Qualities.

In the current times of revolutionary change in technologies, in work, in so many arenas of our lives and being, the question and quest for meaning has become a central issue in our lives.

We live longer and longer, yet the quest for meaning, toward wisdom, eludes us.

What is happening to us? What is meaning? What does meaning mean?

The Crisis in Meaning

The present moment seems quick; abrupt. No matter how fast we live and go, there is less and less time.

The best and worst world axes are poised on the edge of revolution. We try to decide whether to look backward or forward to fill/fulfill our lives. The times are pregnant: full of meaning but also empty and vaguely ominous. The future…?

The self is saturated, bloated. Images increase geometrically in our internal dialogues. We connect electronically with the entire world just as we disconnect from our closest relationships.

It is easy to proclaim some current crisis in meaning. Symptoms: progress lost; tabloid tales hyping NEWS emptying actualities, it’s all celebrity and show biz; life lonely, lacking community; violence violating boundaries smirking at the idea of good will to all; greed breeding more greed justifying whatever we want to do…and can get away with; more murders, unmotivated lives; the death of belief in truth; there is no stop the buck can find. Responsibility, obligation, caring, sharing…Values, morals, texts. Context?

The reactions which the announcement of a crisis in meaning provokes are intellectually and psychologically complex: a sense of cynicism hovers over being as trust diminishes; questions of experience and identity homogenize, simmer, and stew. We sue!

The idea of crisis pushes many to believe that these times need some sense of, some return to history, or that life and being and these times could be should be different; spiritual; values.

Rampant individuality celebrates itself even as our loneliness searches for the idea of community. We only meet at the Mall…of America. Separate even when together. Separate especially when together.

It is easier to note some of the apparent features and results of such a crisis, more difficult to specify its urgings or causes. It does not, like Nietzscheâ€™s pronouncement last century of the death of God and the rise of European nihilism, seem directly palpable. It has no particular place or locus, no specific topography, no map. It is a more a circumnavigation, a ramble. Fluid–these times are–like mercury or volcanic flows.

It is not merely, as some say , any singular issue of meaning’s politics: not to be quickly solved by a rising good will, not to be cleansed or obliterated, not just a question of being nice to one another; not simply lacking pity, sympathy, or a walk in someone else’s shoes; not merely a lack of commune-ication. All of being is condensed into politics and economy and explanations which leave us cold in this winter of our being.

Instead the crisis in meaning has many aspects, directions, roots, routes, relations, specifications, causations. Solutions?

Consider: a modern world concerned with the human–human being and human rights–notes an increasing interest in the non-rational, particularly in literal (messianic, fundamentalist) religion and various forms of mysticism: New Age, ESP, witchery, Sci Fi.

Something is missing: spirituality, transcendence, belonging; yearning for something more to fill and to fulfill us. An increasing use of intoxicants and other drugs associated with a sense of the lack of meaning in life as such. Some wish to escape…from reality. Some vaguer wish to redefine reality in order to find…ourselves.

More: there is a rising infatuation with nihilism; intellectual, social, and artistic; suicide, as well as various celebrations of Satanism. Violence sells movies sell violence. Ethnic retreats into ancient wars flame fear. This is a New Age; a time of post-modernism. The modern is over, passe, past, passed over. There is no truth in truth. Perspective is all…there is. Destruct, deconstruct the edifice which got us here. What’s left? Anything? Nothing! Culture? It’s all politics, power just as Nietzsche warned us. Prophesied?

We retreat from a trust in objectivity, of knowledge, of science, of the promise of progress and a better life through chemistry. From heavy metal rock music, to various attacks on objectivism, to an increasing distrust of the technologies which had formerly been considered progressive, science is cast within images of Dr. Strangelove. Or it has sold out to the highest bidder. The ground of our being is saturated with oil and pesticide residues. All the wilderness is going, going…sold. No place to be at home which isn’t already occupied. Bene…fits! Risks.

We came upon the basic building blocks; DNA, B, C…D. We find that progress now promises miracles: cures, foods, a utopia of bio-logic. Now we can engineer life: techne become la vita dolce.

We create new forms, play the deity with chemicals and flirt with the very concept of futurity. Hubris rises to the height of the Tower of Babel in the bargaining over patents: who owns species will own life and the concept of the future!? Who? Not you, not me, not our children. Clones. Offspring of and in an ever-widening present. Any concept of the future remaining? Are we our genes imagining ourselves in order to…? Propagate. Our purpose for being; any purpose left after sex? No morning after…pill.

Where we had apparently solved the plagues within our medical memory, the development of AIDS plagues our thinking, directing us to visions of holocaust and the reequation of health with morality. What devil’s contract did medicine make to conquer sickness? Evolving antibiotics become neutral, neutered. No one is immune. Life’s fountains spew an elixir of youth and deadly gas. A hiatus from…death?

Through miracles of modern medicine we live long, longer, longing. The idea of longevity: is it replacing the idea of a life well-lived? We bathe full time in the fountain of youth splashing over the idea of wisdom long gone. Where is wisdom? Did anyone notice when it…got lost?

The retrieval of the body in some opposition to mind and reason, also indicates a sense of impatience with modernist rationality; as does its accompanying concerns with other species and a return to nature.

We discover that our notions of human nature rest heavily on the idea that humans are unique and differ from other species because (we alone?) have language. Other species don’t have syntax: this allows us to justify eating them?

Gender, feminism, ethnicism rediscover and retrieve the moment when Plato banished the body , asking us to wonder who and what we actually are; having been disembodied, disempowered, even as we see ourselves but principally in others’ terms and gazes. Life is anorexia; we empty ourselves…out?!

What reason? Ourselves: images! Representations? Who are we if we act as if we merely were reactive mirrorings? Narcissus? Trying always to look attractive to the image of beauty? Surreal, a simulacrum, I wish I…were…am…would be. Am I/not…pretty?

Other wishful returns (retrievals, recollections) to earlier golden ages and classicisms propose solutions to current dilemmas. A recent book proclaims a solution to the closed mind of Americans by proposing an intellectual-political return to the foundations of Western thought. Similarly, the return of fundamentalism to the ancient religious texts of the Bible or Koran seems to grant a double promise of truth and salvation, meaning…what? Meaning: yield, surrender, submit, believe!? Meaning: freedom?!

Revisionism: We reinvent history which reinvents present experience incessantly. And we’re good at it! Proud of it. We spin stories on our wheels like life’s yarns: spin-off’s, spin-doctors, all of life a yarn.

Humanism was invented to combat the idea that nature was…well, natural; not supernatural. But we revise history to re-envision present being to match our vision of ourselves. Do we see more than our representations mirrored? Being, meaning?

Finally (for now) there is a mixing of philosophical-theological-medical traditions, the result of ideas coming to us from the entire earth: wellness, holisms. What next? What works!?

In this global cosmopolitan context it appears obvious at least by contrast that there exist other human modes of being and meaning . Our concepts of reason developed fairly narrowly within a particular Western history of thought. These had appeared definitional of reason and knowing; a single, correct approach to truth. Rational? There are other ways of being: rational?

As ideas float in now from the other traditions, this seems less certain. Relativism; each to her/his own. Reality or perspective? Absolutism, certainty, truth, meaning? Most things seem less certain…except change which seems to quicken as we gasp grasp for time, more time.

In these so rapidly changing times, the question and quest for meaning are confused and confusing. The very nature of work, the questions of nation and boundaries in a global moment, a blast of new technologies accompanied by conceptual changes which are huge in the history of the human: these set the contexts for this exploration of meaning.

Aphoristic explorations into the meaning of our being, why, who, when, where, what we might do about this time toward envisioning a good and inclusive future: these are posed as thought pieces about these times we are in.

How to begin to see what is happening, to search the various domains in which change is ringing out, and some directions for recovering meaning â€“ these are the quests of this book wondering why the recent end of East-West politics giving rise to a recurrent form of religious Crusade. How to find, to grant meaning to ourselves, to be able to find ground to see and understand; potentially to do, to teach, to love life, to inspire our futures.

Allan Bloom, The Closing of the American Mind: How Higher Education has Failed Democracy and Impoverished the Souls of Today’s Students ( New York: Simon and Schuster , 1987)