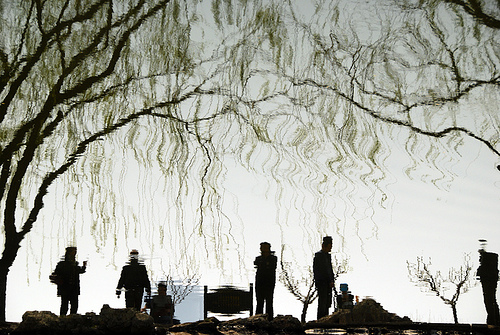 I like the idea of being (called) a humanist. I try to interpret and understand the notions of humanism and being a humanist through the outlook of being a writer-teacher.

I believe that all humans are a part, each an aspect of this world in physical and conceptual senses. I attempt to take the ideas of the human condition which all of us have thought out, and get them into the minds and lives of everyoneâ€™s todays and tomorrows.

I do not merely reject spirituality or whatever visions through which life is seen and lived, but I am sure that lifeâ€™s problems must be thoughtfully considered, and new analyses applied to new times.

I donâ€™t like everything about anyone, least of all myself. It is not my wish to make anyone feel good merely by playing with their moods. Rather, I wish to praise their confidence in being able to deal with the world as it is, and will be.

I study them as persons like myself, also urged to write and teach and study, trying to walk with them and their ideas as they would peruse todayâ€™s world.

I need a great deal of privacy and down-time to absorb what is happening in some constant epochal battles with being in the world. I like to live in the words and minds and ideas of the worldâ€™s great writers, thinkers and doers. Thus, I deal in the lives and words of persons who are mostly now dead; whose words, ideas, and products such as books and musical texts have survived. I study them to see how and why they have survived, to see what and how they said, attempting to place myself in their thoughts and times; and bring them in ours.

I play their music in order to discover what they have written in it.

All this I try to tell to others, and especially to urge their own studies that it may become a useful part of their own lives. I like the idea of being a humanist, and want these ways of being and thinking to live actively and thoughtfully in our lives: toward visions of the future.